With origins dating back to the early 20th century, American Licorice® Company has been family-owned and operated since 1914, holding its place as one of the original licorice manufacturers in the United States and one of the oldest candy companies in the industry. As a West Coast favorite with a cult-like following, Red Vines® candy is a staple at movie theaters, on road trips, backyard barbeques and Hollywood award shows. American Licorice Company was among the first to enter the U.S. sour candy market in 1990 with its widely coveted Sour Punch® straws.

When crafting earned media programming, the products have always been the central focus with seasonal and thematic pitching. However, the agency sought to tell a deeper story and unearth the brand’s commitment to social justice, cultural trends and creating unique experiences for media and content creators that stoke the sentiment that has kept the company part of the American fabric for more than 100 years.

HOW DO YOU MAKE RED VINES A KARDASHIAN HEALTH FOOD?

The short answer is, you don’t. However, by having a firm understanding of the ingredients, the process by which they’re made it’s entirely possible to develop a narrative that is keeping in line with the latest food trends. Red Vines are in fact, vegan. With dedicated media listening and taking into account consumer habits in the last quarter of the year, GreenRoom developed an outreach strategy to be included in the narrative on vegan offerings as many consumers typically feel the need to change eating habits at the start of a new year. 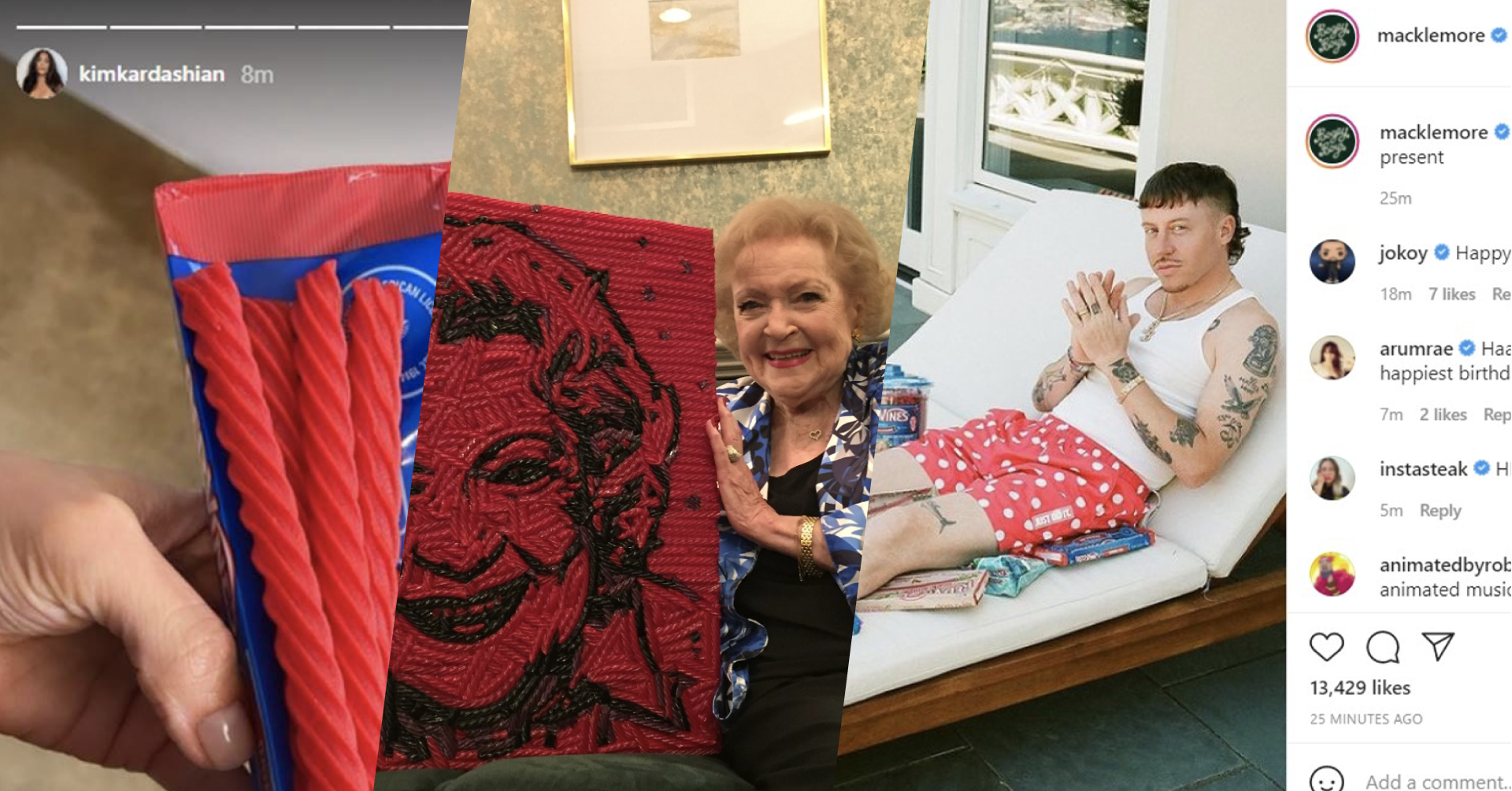 Beginning in December and carrying into the first part of the year, the agency successfully secured story inclusion in numerous vegan-oriented outlets online which ended up yielding a benefit that would shock even the most seasoned marketer: a sole shout out from one of the most famous women in the world.

The important context in this instance is that this was not a paid placment, and as a standalone feature in Kim Kardashian West’s story to more than 210 million followers would have cost hundreds of thousands of dollars if not millions. Instead, she noted that “Google says that these are vegan” which is a direct result of the earned media placements in the months leading up to this post that went live in mid-March. Raising the SEO of the brand in the context of being vegan, led to an intangible piece of coverage by arguably one of the loudest megaphones in the world.

The brand enjoyed a rush of positive sentiment to the channels as well as an increase in followership. While the online store didn’t rush to sell out, brick and mortar retail sales were very strong which was attributed to the visibility of Kim’s story post.

… and choose Red Vines! To realize celebrity evangelism more fully, the brand worked in tandem with GreenRoom to engage in very active social listening. While articulating their love of the products online, the GreenRoom team works on a highly tailored gift to stoke the fires of brand loyalty. In nearly every case, it’s resulted in additional amplification and brand visibility on social channels.

Rather than focus on paid integrations like many brands, the American Licorice Team has gotten creative with uniquely sharable pieces of content.

Whether it’s custom art for Betty White, a birthday care package for Macklemore, customized package for Ice Cube, or a custom label for The Office Ladies Podcast, American Licorice Company continues to win over celebrities thanks to their creativity and genuine appreciation of the support the brand receives in kind.

Like most brands, the pandemic was devastating to the American Licorice Company’s in-person event calendar. A central component to sampling the latest products, trade and retail support through conferences and tradeshows, there were also several activities planned for media, influencers and consumers to celebrate Sour Punch’s 30thAnniversary. With those removed from the media plan, GreenRoom wanted to carry the spirit of nostalgia into the 31styear. It was also a time in which the brand would be formally launching into two new categories: hard candy with Aprati Foods and the growing “better for you” sector with the acquisition of Torie & Howard.

With the theme of nostalgia, GreenRoom negotiated a compelling rate to have 90s star of “Family Matters” Jaleel White, who many know as Steve Urkel, act as “Candy Sommelier” for a virtual tasting. By inviting a range of media on the heels of the brand’s most important tradeshow, the agency’s strategy was to not only create excitement leading into the show and give the brand new assets to showcase with the launch of the newest products, but to also reach a wider audience as well. Without missing a beat, Jaleel was the ideal host and had effortless banter with the VP of Marketing for American Licorice Company, Kristi Shafer. 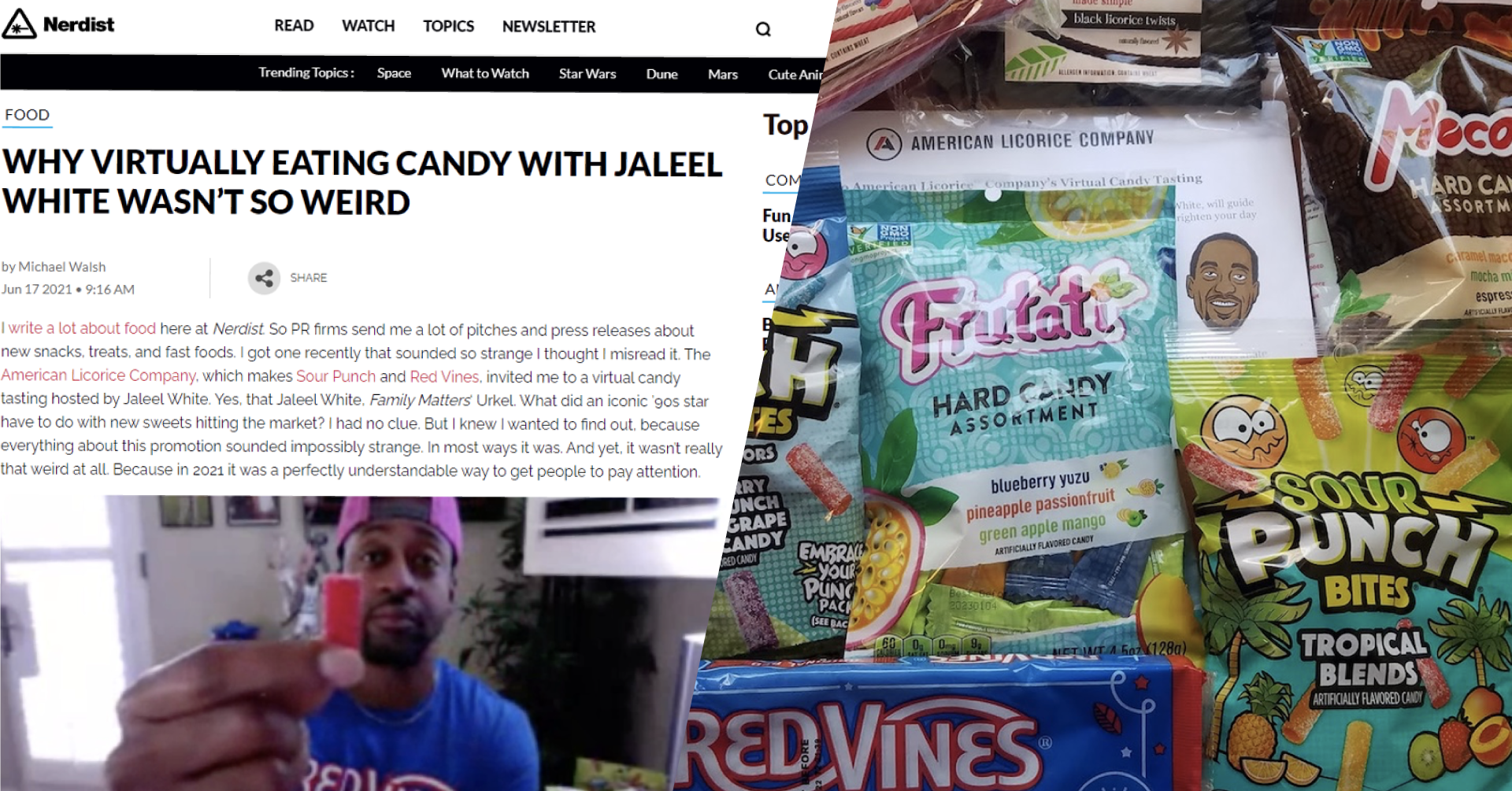 The media feedback couldn’t have been stronger with published pieces in a myriad of outlets and feedback including:

“Without Jaleel White’s involvement I wouldn’t have even remembered the invite. And my editors definitely wouldn’t have approved me covering it. They did though for the same reason you’re reading this right now: it’s bizarre enough to be interesting.”

“For one hour the company had my entire focus. And because they got mine, they now have yours. I’m happy to tell you how much I genuinely liked some of their new offerings. I hate black licorice, but their upcoming Red Vines Made Simple Black Licorice Twists are phenomenal. They have a nice subtle taste. I also loved their Sour Punch Tropical Bites. Though if you want something less tart you’ll prefer their sweet Sour Punch Sweet Bites. Both are light and dangerous. I could have eaten an entire bag of either in one sitting. And I’ll definitely be getting more bags of their Aprati hard candies. Both the Mocati coffee flavors and the Frutati ones.”

AN OLYMPIAN WHO EMBRACES DIFFERENCES

The “Embrace Your Punch” mantra was born as a way for the brand to be able to encourage tweens and teens to find the joy in things that make them different, or their “punch.” Someone else who shared that mantra and inspires audiences all over the country when he’s not winning medals was decorated long jumper Norris Frederick. 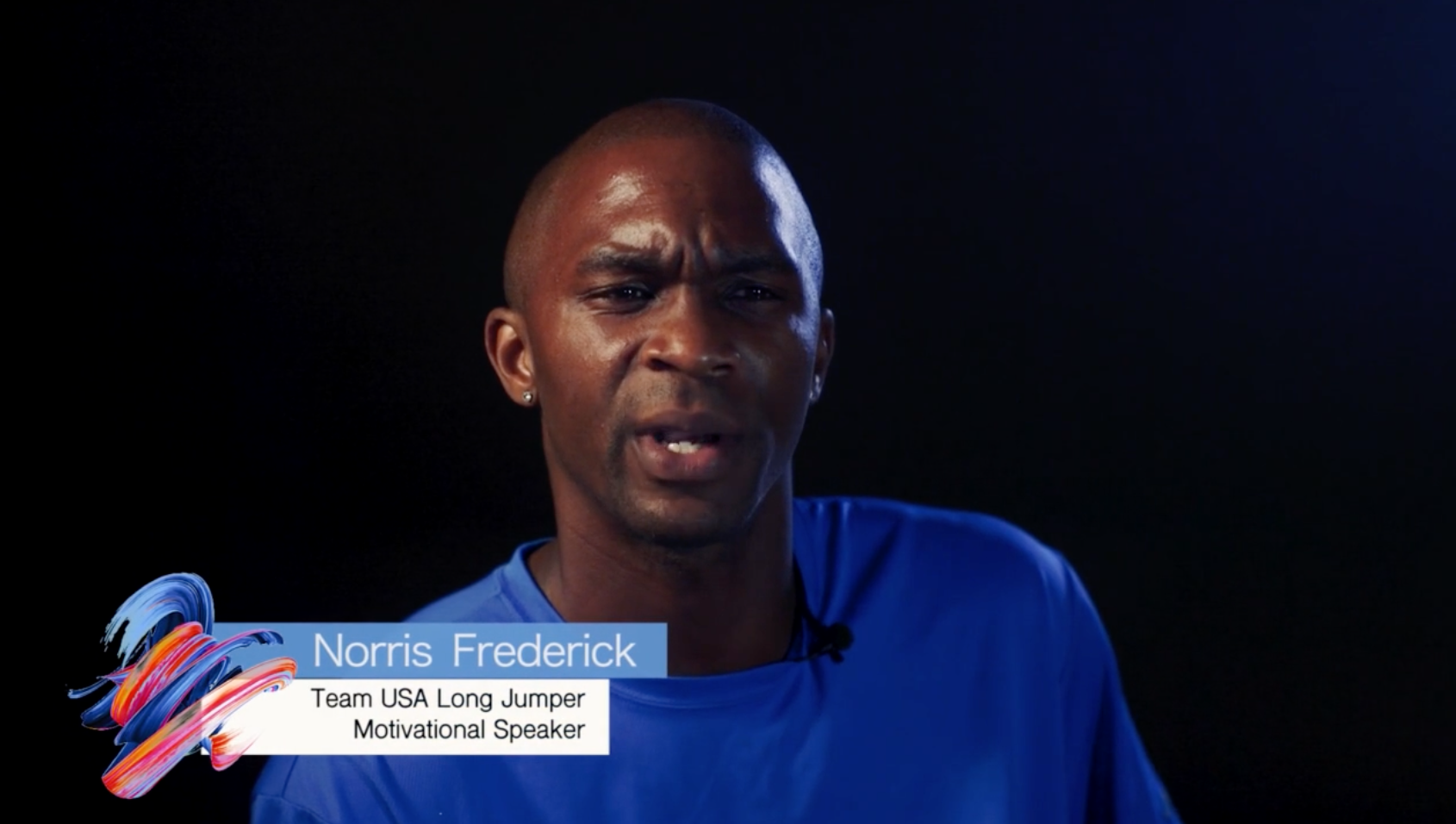 Working closely in tandem with the Boys & Girls Clubs, he hosted a motivational talk and showed how important it is to be vulnerable and not shy away from things that may make kids feel othered. It was a powerful example of authentic conversations that helped teens feel more comfortable in their own skin.